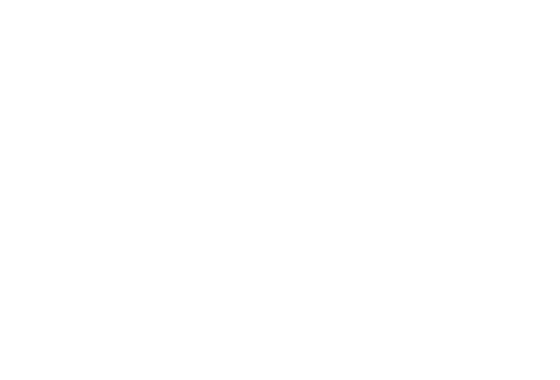 Volcanic Geo-tourism is a kind of tourism in nature, which is based on Volcanic GeoTourism and different forms and volumes, which is focused on the output of volcanic lava. Maku city has many potentials for Volcanic tourism due to its various attractions related to this area. The Volcanic route which is discussed in this article, can be visited in a day’s time. The length of the route is about 100 km and its origin will be the city of Maku. 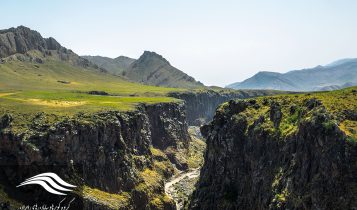 The Basaltic Valley is located in the geographical location N 39 21 E 44 15, 25 km north west of Maku town and on the path of Avajiq village. This valley is also known as the Valley of the Snakes and is 3 km from the village of Badavli in the city of Maku and parallel to the Avajig road. The length of the valley is about 3 km and is eastward to the western end of the valley leading to the farms of Badavli village. The Zangmar River originates in the valley of Mount Ararat Highlands in Turkey, and after passing through the valleys and villages on its path, it finally floats to the Baroon Dam. 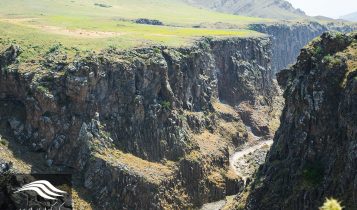 The entrance to the valley is located next to the road, and in order to enter it, you must go down the slope of the valley that is famous for the “Qir Mizi Likh”. Note that because of the height of the walls, the shadow quickly overlies the valley, and so keep your eye on your timing for photography and choose the right time for it. The Badavli Valley has a gentle slope and you will need about 2 hours to pass it. The basaltic walls of the valley are very scanty and hence the safety and precaution aspects must be taken into account and the proper distance from the walls during the crossing of the valley is maintained.

In the middle of this valley, the blue spring flows out of the basaltic walls of the valley. This spring is known as Khatun Spring or Khatun Bulaghi. In the next step, the valley leads to the valley’s horseshoe which has the most valued landscapes. After this bolt, the valley becomes wider and the walls find less heights and more vegetation shines. The path to the valley leads to the waterfall of Badavli Valley. The altitude cascade is about 7 meters high and has beautiful scenery alongside basalt walls. 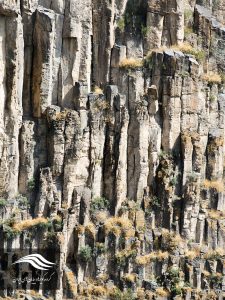 Maku basalt prism columns are one of the rare insights in the world that results from the freezing of volcanic lavas during the third period of geology. The contraction resulting from the freezing of the lava and the angular distance of 120 degrees are influenced by each other. As a result of the effect of these forces, the igneous mass is converted to the hexagonal hemispheres in the opposite direction. Usually the row of lower prisms is more regular than the upper ones.

When the basaltic lava flows out of the crater of the volcano, it begins to cool down. During cooling and converting to a basaltic layer of stone, the thickness of the joints (fractures of the natural origin) may be formed to form a mass of rock in the form of columns with a cross section of 3, 5, 6, or 7-sided. A network of these joints makes the basalt stone layer a set of prism columns that are placed next to each other and surrounded by regular joints. The reason for the formation of such a system is somewhat complicated. The appearance of their initial form dates back to the time when the basaltic lava cools down. With further cooling and freezing of the lava, due to the greater contraction, this junction complex, formed on the lava surface, was developed into a lava, which is now a basalt stone layer, and is three-dimensional (also developed in depth). 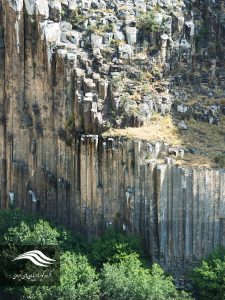 Basalt fibers, despite the very similarity to the glass fiber and even the similarity of the manufacturing process, have better resistance properties. Basalt fibers are highly resistant to alkali, alkaline and acidic materials, and are therefore widely used in concrete, bridges and marine structures.

The best time to visit Badoli Valley is from early spring to early fall. The basal charter of the Maku Free Zone is located 25 km away from Maku near Chaldoran Road. 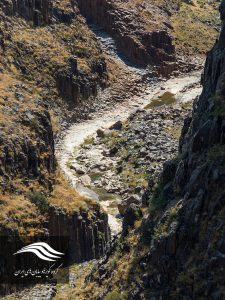 The Zangmar river originates from the Turkish and Iranian borderlands, which passes through the city of Maku, and then goes to the Aras River in the city of Poldasht. The sign of this river is from the combination of the word “Zang” meaning black and snake, and the reason for that is black basaltic rocks that make the river look like a black snake that passes through the deep valleys of the area with a lot of twists and turns. The Zangmar River is one of the most important factors affecting the climate of the Maku region. The river originates from the southern mountains of Beyjak Village and after passing through a long path passing through the deep and beautiful valleys between the mountains of Qareh Daq, it traverses to the north and joins the Ghareh Souq near the Ghaleh Jouq village, and towards Mako, Poldasht, North Azerbaijan and eventually the river Aras. 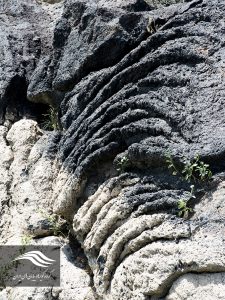 Moving of the lava and cooling along the way creates geologic phenomena that look like interconnected ropes, which is why they are called Ropy Pahoehoe or twigs. Rope lavas represent the direction and shape of the volcanic lava movement. The shape of this shape is such that it shows the direction of the smoothed motion. These lavas are one of the forms of the output of the Ararat volcano during the Quaternary period, and part of them have been removed from the surface gaps.

Raw lavas have a basalt composition and have low viscosity due to the low amount of silica present in their composition. 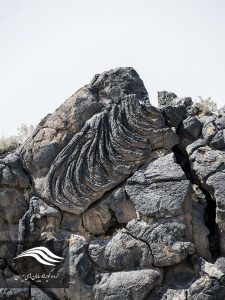 Low viscosity of the lava causes a wide range of surfaces to be covered with hot water. The shape of the rope is the result of a cold and hardening of the underlying and warm, and moving surface of the lava.

The lava of the volcanic Ararat, or the Aqri Daq, and the small Ararat from the mountains of Ararat, have fallen down the slopes to the Maku valley and the town of Poldasht and the proximity of the Aras dam. The lava is also visible on the hill’s raisin on the Awajiq route. 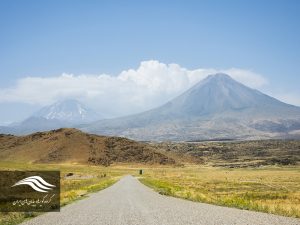 Mount Ararat is located in the northeastern part of Turkey, on the border between Iran and the Nakhichevan and Armenia. The mountain has two volcanic peaks, the large Ararat with a height of 5137 m, and another small Ararat with a height of 3896 m. Ararat stands are also known by other names among the tribes and peoples around it. In the Armenian language of Massey, Turkish is also called “Ağrı” and “Kurdish” is also called “capture”. Mount Ararat is the tallest peak in Turkey.

Ararat peaks originate in the rivers of the Tigris and Aras, surrounded by the Caspian Sea, the Black Sea and the Mediterranean Sea. The proximity of the Ararat volcano to the border with Iran, and in particular the city of Maku, has caused beautiful landscapes in this area to create the magnificence and beauty of this volcanic peaks. Since the emergence of different basalts around the Maku, due to the exodus of the volcanic lava of the Ararat Summit and its movement to the lower regions of the Maku, the manifestations and magnificence of this pole in the formation of igneous tourism in this region plays an essential role. From different regions of the city of Maku, it is easily visible.